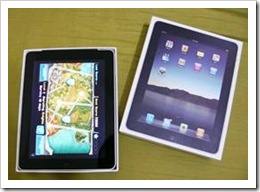 iPad, one of the hottest products designed and developed by Apple, Inc., has been so popular that it has led the trend since the product was launched in April, 2010. This innovative product has brought out renewed interest in the Tablet PC market and revealed Apple’s intention of exploring more opportunities and expanding into electronic book (e-book) arena. The introduction of iPad has significant impacts on existing products in the market as it competes not only with Kindle, designed and developed by Amazon.com, Inc. but also threatens traditional notebooks and netbooks.

It seems that iPad is likely to take over the role that the above mentioned products play. However, is it really perfect? Is iPad going to be like iPhone 4 that has the problem of antennagate? Latest news has brought up the topic that iPhone 4 has a problem of poor 3G reception due to an inadequately designed antenna. This antenna problem with iPhone 4 naturally makes end-users suspicious of whether iPad will also encounter a similar problem with its antenna. Based on different users’ using scenarios, We – Allion Test Labs, Inc. – and Training Research Co., LTD. conducted a research together, and through the experiment we found out that for iPad, 3G reception would not be affected by the end-users’ holding positions. However, the test experiments have illustrated that there were shortcomings of the wireless reception for Wi-Fi that sought further improvement and should be especially regarded.

During the experiment, we designed and implemented the experiments according to three testing scenarios described in the following sections to observe how the throughput, also known as Wi-Fi signal reception for iPad, changed under different channels that reflected various degrees of attenuation of Wi-Fi connection. This throughput could also be referred as the Wi-Fi connectivity which is what end-users care the most.

Wi-Fi Wireless LAN channels are designated. Despite the fact that there are multitudinous channels, different countries apply different regulations to the allowable channels. However, products with Wi-Fi connecting function should be at least capable of dealing with various signal source channels within the specified frequency bands. In other words, products with good Wi-Fi reception should be able to carry out the distinct frequency bands in which all designated channels are divided. The performance for their throughput with the corresponding attenuation should deliver consistent data results regardless of which channel is applied among all channels.

In order to observe how the throughput of iPad presents under different channels, we selected three distinct channels: Ch.1, Ch.6 and Ch.11 to execute the experiments.

According to the test result, we found out that the throughput with the corresponding attenuation varied from channel to channel. For instance, while iPad was dealing with Ch.6, the wireless connection became unavailable since the attenuation (*the higher the dB, the greater the degree of attenuation) reached 90dB and the throughput dropped to 0Mbps. In comparison, while iPad was dealing with Ch.1 and Ch.11, the throughput declined to 0Mbps with corresponding attenuation of 85dB. Supposedly, the performance results for the above channels should have displayed similarly. Nevertheless, the above chart illustrates that inadequate design of Wi-Fi connectivity lead to inconsistent throughput. Thus, iPad will need to improve its Wi-Fi connectivity among the different 802.11n channels.

Test Experiment 2: The Impact under Different Angles of Signal Source

iPad, light weighted with a Wi-Fi data connection function, is considered a portable device. This revolution brings out the possibility for end-users to get online easily from place to place. Hence, at the designing stage, the

product designers should have thoroughly considered the impact of different product positions with respect to the signal source in order to meet the expectation of mobile communication.

Through the test experiment, we used a rotational positioner to help examine if iPad’s Wi-Fi signal reception would retain the same level while different angles of signal source were applied.

Within 360 degree, we set 24 check points and examined the Wi-Fi throughput of iPad for every 15 degree. According to the test result, we found that the signal reception slightly declined while the signal source was positioned at 90 degree, 255 degree and 270 degree with the corresponding attenuation of 80dB. We also noticed that the signal reception tremendously declined while the attenuation reached 85db and 90dB. The results have demonstrated that the throughput would vary according to different angles of signal source provided. In short, there is still a big improvement ahead for iPad for its comprehensive signal reception under different angles.

We applied several testing scenarios and concluded that the throughput (Wi-Fi Connectivity) of iPad would show differently while the signal source of the iPad was provided from different angles such as 90 degree or 150 degree.

The three test experiments conclude that iPad is similar to iPhone 4 in that it suffers from similar issues as iPhone. In other words, iPad’s Wi-Fi connectivity can also vary from all different channels or angles of directions. Furthermore, testing on the brightness of the screen of iPad reflects an interference issue of the RF (radio frequency) while connecting Wi-Fi. The test results inevitably make iPad users foresee how likely iPad is going to have an antennagate problem. However, end-users should be aware that iPad is not the only product that has such kind of shortcoming among all Tablet PCs.

We have further conducted test experiments on other launched Tablet PCs and MIDs (Mobile Internet Devices) and have found out that they also had similar problems.

In comparison to the matured product such as notebook, based on our test experiments, we conclude that traditional notebooks less likely show problems of unstable connectivity, incomprehensive signal reception coverage, and interference of radio frequency. As notebooks have been initiated since 1980, they have become mature with solid developing technologies and skills. Multitudinous tests have been applied and executed for examining and validating for the designs and performances of all functions that apply to the designated products. As a result, notebooks that we see in the market are of course the enhanced ones.

In contrast, the iPad’s product features may not be nearly as mature as a traditional notebook as end-users may notice a weaker Wi-Fi connectivity compared to its counterparts. Such inadequate connecting performance can be accredited to lack of comprehensive planning during the product designing stage and less care taken to simulate end-users’ using scenarios.

Similar to the situation that iPhone 4 was initially launched, there might be another dispute over the problem of antennagate for iPad. Although iPad itself is attractive for consumers, the key factor is how the product designers overcome the challenges that end-users face while using it in their daily lives. Additionally, this factor also affects how well the product can be adopted in the market and how well this can be sold. In short, every single detail has to be addressed and considered in the designing stage regardless how well-known the brand is, how popular the product is going to be, and how terrific the functions are going to have. Any inadequate design is likely to cause bad user experience and lead to a negative impression towards the product. Hence, while designing a new product, in order to investigate the potential risks towards it, it is important to bring comprehensive verification tests into practice during the initial stage, and this is the key that helps discover the root causes for the problems.

In this article, we utilize the test data to point out the obstacle of Wi-Fi connectivity that iPad and other Tablet PCs might encounter. We highlight not only the issue which consumers may be interested in knowing, but also remind relevant manufacturers to consider, be aware of various possible using scenarios from end-users’ point of views and be certain to run verification tests precisely in order to provide consumers with qualified and reliable user-friendly goods.