Battery-powered operation times for each notebook were measured under similar conditions using BAPCo Mobile Mark 2007. The results below were obtained. 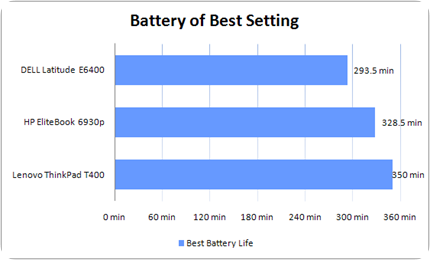 The Lenovo ThinkPad T400 (5 hours, 50 minutes) has the longest battery-powered operation time, followed by the HP EliteBook 6930p (5 hours, 28.5 minutes), then the DELL Latitude E6400 (4 hours, 53.5 minutes). The operation time of notebook computers depend on the electrical power consumption of installed components, but it is possible to extend the battery life by tuning of the product itself and taking advantage of proprietary software and management utilities. Consequently, when selecting a notebook computer with a focus on battery life, specifications such as CPU and chipset or installed components as well as the tuning of each PC vender are important criteria. 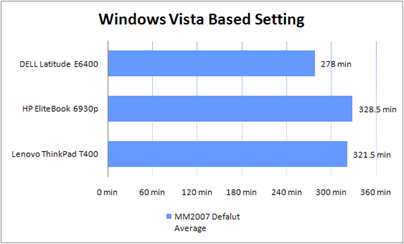 The DELL system contained “Reduce LCD Refresh rate”, “LCD brightness reduces during inactivity”, and “Set Color resolution to 16bits” that the Lenovo system did not have. These were excluded in order to measure the impact and advantages for both systems at parity. The HP system was excluded because it does not have such preinstalled software. 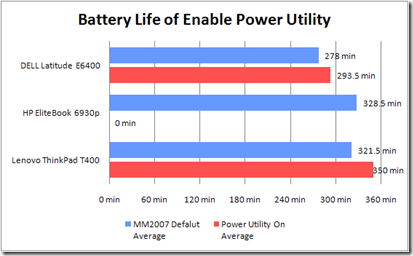 Based on these tests, the Lenovo ThinkPad T400 (5 hours, 50 minutes) has the longest battery life followed by the DELL Latitude E6400 (4 hours, 53 minutes). With the advantage of the proprietary power management software, the DELL notebook computer battery life increased by 5% (extend 15 minutes), and the Lenovo notebook increased by 9% (extend 28 minutes).

It is a greater advantage that the Lenovo ThinkPad T400 power management software is already enabled in factory default; therefore it is possible to get the maximum battery life advantage without user intervention. DELL does not enable the power management software in factory default, so the user must manually configure these settings. In addition, we set the internal optical drive off for both notebook computers, However only Lenovo has the function to turn the power on when eject button is pressed again. Therefore Lenovo has this additional advantage over DELL on the usability side.

Test Overview
Following is the testing environments and detailed specification of this benchmark test. 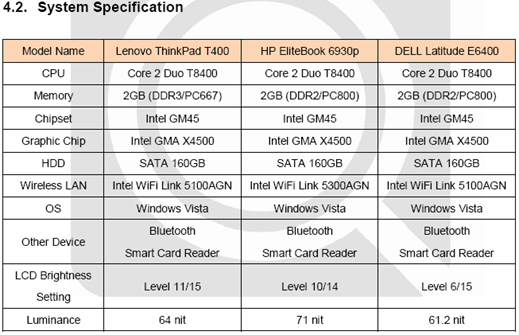