To overturn our stereotypes, Smart TV manufacturers have tried to build a bridge between traditional television set and contemporary computer. Smart TVs and Connected TVs were the most eye-catching home electronic products while Tablet PCs were the most outstanding consumer electronic products at CES 2011. Big and thin LCD screens are not the only features to make high-end TV products but more advanced features, such as integrated Internet capabilities and computing ability.
According to the world-famous market research and consulting firm DisplaySearch, the most recent report indicates that 21 % of global TV products which were sold in 2010 have Internet connectivity, and it is also predicted that smart TV shipment will reach up to 1.22 billion units in 2014. Obviously, Internet connection has already become the trend in future television market.
What exactly makes a TV “smart”? To help you better keep pace with the market, we have collected some stunning Smart TV brands that have showcased at CES 2011 here below.
Samsung: 3D is the Power of Smart TV
Samsung won 37 CES 2011 Innovation Awards and was one of the most aggressive manufacturers who spent a fortune on advertising their Smart TV products; one of the most compelling Smart TVs was a 75-inch 3D LED Smart TV, which is claimed to be the largest full HD 3D LED TV ever. Not just only about design, but also about its functionality such as Internet connectivity and a wide range offering of applications. Samsung also displayed some Blu-ray players and the lightest 3D glasses to provide an identical 3D viewing experience to the world.
LG: Make Life Smart and Simple – “LG Smart TVs”
At this time, the target market for LG Smart TVs is to consumers in all different age groups by providing easy-to-access functions and endless entertainment options. LG has reached a higher stage of 3D entertainment by inventing its easy, uncluttered Home Dashboard. Moreover, Magic Motion Remote Control keeps originally simple to operate the four main sections which include TV Live, Premium Content, TV Apps and Launcher Bar without a PC keyboard button. Additionally, the invention of Smart TV Upgrader can make normal TVs to have LG Smart TV functions. LG Smart TVs make cinema-quality 3D possible for viewers by adding theater-alike features, such as flicker-free picture and blur-free images. 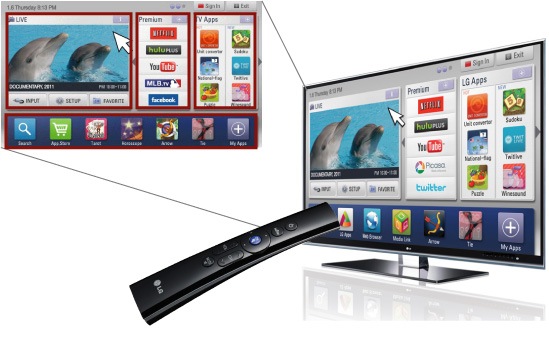 Sony: Believe in Television Redefined
TV redefined is not only Sony’s sales pitch for this year, but also its development direction to open the gate of Smart TV market. Since Sony has a comprehensive cross-platform development in many different fields such as gaming, music, picture and technology, the quality of a new series of Sony Smart TVs have been improved a lot in both software and hardware aspects. Except for 3D content and Internet connectivity, Sony is launching its own video-on-demand and cloud-based digital music service Qriocity, and they also corporate with Discovery and IMAX in a 3D Internet TV program “3net”.
Other Spotlights: Vizio, Acer and Asus
The North America top one seller Vizio believes to give consumers affordable quality life, and Vizio emphasizes on VIA Plus products interaction which is mainly between cell phones and flat screen televisions. Plus, two of the biggest Taiwanese PC manufacturers, Acer and Asus, are taking a step into smart electronic products through cloud computing by inventing new product/ platform named “Clear.fi” and “WAVI Xtion”.
As we can see, Smart TV has become a new market in many technology fields. Every vendor is trying to break the original format of Smart TVs into expected styles individually; therefore, new product development is significant in the very early stages. The more Smart TV products are coming out, the more challenges manufacturers will need to face with. Apparently, the importance of product testing and validation cannot be ignored. We also believe, consumers’ expectations will stimulate product technique to keep improving and growing to the next level. We will keep providing the latest trend reviews, please keep an eye on our Technical Direct.