For wired and wireless charging development and products; therefore, Allion carries both the depth and breadth of charging performance test and evaluation. In the future, no matter what vendors or related components developer including wired or wireless charger, smartphone and IVI system could consult Allion for the most complete battery charging performance analytics, compliance tests and solutions.

The report will be divided into three sections. The first section is the competitive analysis for wired charging technologies, specifications and universal charger devices available in the market. The second section includes the brief introduction and testing for the wireless charger devices launched and certified by wireless charging alliance. In the last section, we will conduct two charging technologies competition and analytics. In fact, the hardware development of electronic devices has gradually spread to the peripheral applications such as battery chargers. Getting the key successful factor of power supply will totally create the innovative opportunities for industrial energy usage and storage.

When USB technology is no longer just the interface for data transferring, but become available to supply power for smartphone, tablet PC and other mobile devices, that is consistent with the requirements of universal charger standard, “IEC 62684” we had introduced before (Please refer to IEC 62684 Universal Smartphone Charger Standard). To comply with the standard specification of IEC 62684 for high performance, low consumption, low radiation and high security management of power supply, the DUT must pass the related USB connector specifications launched by USB-IF. Also, USB-IF will publish the latest Battery Charging V1.2 (BC 1.2) specification and certification before the end of 2013. Briefly, BC 1.2 has three charging modes which are Standard Downstream Port (SDP), Charging Downstream Port (CDP) and Dedicated Charging Port (DCP). Because SDP only supplies a maximum of 7.5W/500 mA, it belongs to low-speed charging port; comparatively, CDP and DCP are high-speed charging ports which can provide up to 500 mA or 1.5A of current to any embedded USB mobile devices or other electronic devices that require additional power and reduces the charging duration. CDP and DCP can also charging through AC wall adapters. In the near future, the device are required to pass CTS certification of BC 1.2 to obtain the USB-IF logo usage, and then all the smartphones, tablet PCs, laptops and digital home devices could use the USB port for battery charging.

Even though USB-IF has the BC specification for USB port, not all the vendors in the market apply to the same specification. For example, Apple’s mobile device are having its own charging models and totally different from the BC specification of USB-IF. Thus, we especially make the Table I to lead you understand the advantages and disadvantages of both wired charging technologies.

According to the Table II, we target 8 USB power adaptors to wired charge 6 mobile devices including smartphones and tablet PCs. Because different devices have their own charging protocol, there will be the differences in charging current corresponding to different USB power adaptors. There are two issues particularly noteworthy in this test. First, when we use Samsung USB power adaptor to charge iPad 4, we find that it only charges 0.476A because of iPad 4’s own charging protocol. However, the 0.476A is less than the minimum charge current required by iPad4 ( 0.5A), so iPad 4 is not charged. Second, according to the charging current of MI 2, we find that no matter what kind of power adaptor is using, MI 2 will be charged approaching to the maximum current of 1A. The charging efficiency will be very fast; however, it will influence the battery life of the device over time. In particular, the process of energy transmission and consumption will reduce the battery life easily. 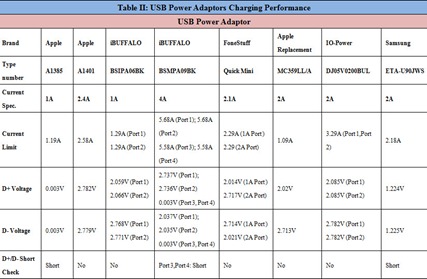 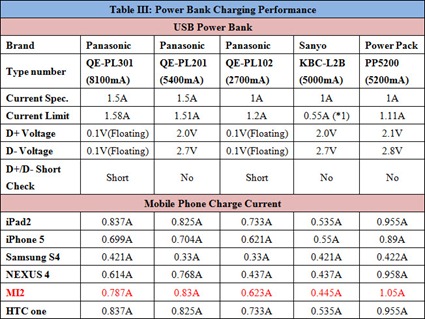 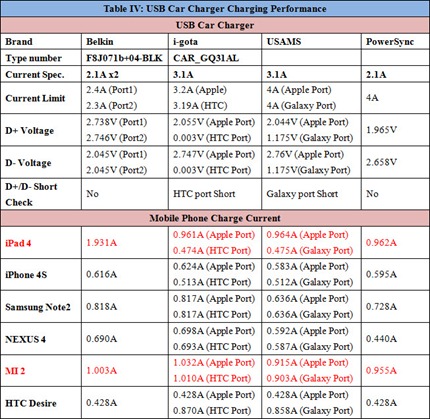 We target 4 models of car audios to charge 6 mobile devices including smartphones and table PCs (Table V). For basic observation, the car audio devices such as Sony and JVC are followed the SDP of USB standard to provide 0.5A charging current. Only the Samisen device is not followed the SDP of USB standard, resulting in many smartphones can’t be charged. Next, we find that the Sony and JVC car audios can’t charge iPad 4. Because the requirement of charging current for tablet PC is relatively higher, but both the devices can’t provide more than 0.5A, the iPad 4 can’t be charged. 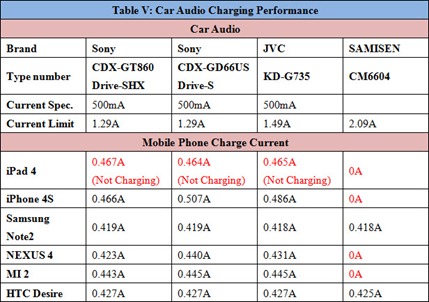 According to the above four test results can prove that the real amounts of charging current is decided by the smartphones’s charging protocol even if there are lots of power banks or power adaptors available in the market which should provide the most effective charging mode without harming the battery life. How to optimize the technology of charging protocol of smartphone is very important in order to fit various kinds of chargers to gain the high interoperability, stable and effective current.

Nowadays there are many kinds of ways to transmit power wirelessly. From the point of safety and technology maturity, “Magnetic Induction” and “Magnetic Resonance” are two mainstream technologies that may be popularized in the future. Here simply introduce these two technologies:

Magnetic Induction: Attach two coils to both transmitter and receiver side. When an alternating current is passed through the transmitter coil, alternating current would generate a magnetic field and the receiver coil would have induction of this electromagnetic signal. The change of magnetic field generates power and charges batteries. However, magnetic induction has its physical limitation. It cannot support charging distance mover 5 mm and longer the charging distance is the bigger energy loss is. Besides, electronics devices being charged through magnetic induction often have overheated problems, which would cause safety doubts about supporting high power-output products.

Magnetic Resonance: The theory of magnetic resonance is different from magnetic induction, which relies on mutual-interaction to exchange electromagnetic power; it is based on the same frequency of resonance on both sides to transmit energy with high efficiency. When transmitter and receiver side both oscillate in the same frequency, receiver side would receive a electromagnetic field generated by transmitter side and thus receive this passing energy.

There are two alliances adopting magnetic induction technique, Wireless Power Consortium (WPC) and Power Matters Alliance (PMA); and Alliance for Wireless Power (A4WP) adopts magnetic resonance. For the development and information of standard association of wireless charging technology, please refer to the official web page of each association (WPC, A4WP and PMA). WPC has the most members, about 130 companies. Products with WPC’s official logo “Qi” are more than 140. Among them, Nokia’s Lumia 920 or HTC’s Droid DNA are widely known devices with wireless charging. Currently Qi’s next spec version is still under discussion, aiming to charge tablets wirelessly and helping the application of wireless charging to be common. 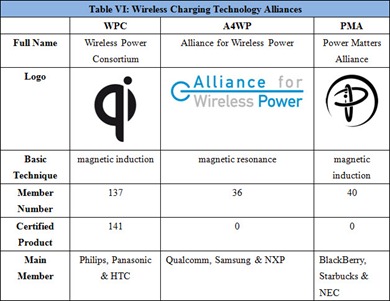 In the test report, we would like to focus on the technology and certified product developed by WPC which technological principle is to attach coils to both transmitter and receiver sides (TX & RX). When an alternating current is passed through the TX coil, alternating current would generate a magnetic field and the RX coil would have induction of this electromagnetic signal. The change of magnetic field generates power and charges batteries. However, we all know that the change of power conversion would cause the energy consumption, especially in the process of TX coil and RX coil for wireless charging (Table VII). Whether from Te1 to Te2 or from Te2 to Re1, different stages of the transferring process would cause the power consumption; that is, there is no one can provide a total current within 100%. Besides, the distance, relative size, coil design, coil angle and coil shape between TX and RX would have an impact on wireless charging. In order to achieve the maximum efficiency of wireless charging to break the limitation of power consumption; for example, it should also be reduced the distance between TX and RX, and both the TX and RX coils should design the same coil size to optimize the current transmission.

According to the definition of WPC, 70% of the power converter is the best and optimized condition. In the test report, our test goal is to observe the wireless charging devices “Qi” certified by WPC could truly achieve the standard of 70% power convert or not. Before the experimentation, we would like to make a brief introduction of TX technological principle launched by WPC (Table VIII). 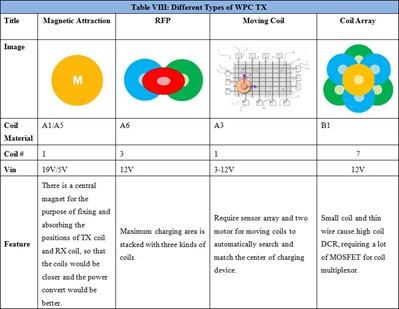 We target 3 kinds of wireless chargers (Table IX) available in the market to charge the smartphones. For different loading range from 100mA to 1000mA, we separately test their performance to observe whether the certified Qi devices’ could achieve the 70% of power convert. 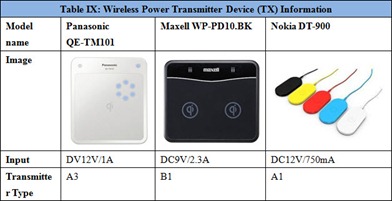 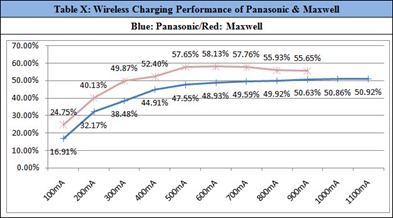 According to the test results in Table X, we find two key issues:

I. WPC announces that the certified device’s efficiency needs over 70% of power convert, but the physical test results never reach 70%

— Nokia DT-900 does not have stable perform and its charging efficiency is unstable while doing test and it can only work properly with the same brand device.

II. WPC 1.1 can support the maximum of 5W@1A, but the physical test can’t reach that number for example, Maxwell’s charging current can’t be enhanced until 900mA.

— The distance between TX and RX is limited, and the better charging performance is at a distance of 1~2 cm. Once the distance is further, the power decay would be increased.

— The coil may cause a lot of heat while charging, and also heating any objects in between.

— Between the charging platform and device, it should have appropriate FOD (Foreign Object Debris) function to exclude the interference of other objects.

— Charging current is easily affected by other signal such as phone calls or other electronic signals to influence the charging efficiency.

Although there is a certified Qi logo, but the “IOP” and “Not Charging” are always the critical issues.

In the last section, we would like to make the competitive analysis of charging time and power consumption for both wired and wireless charging.

In the experiment, we charge smartphones from the 2% of the battery level to full. The test result (Table XI) indicates no significant difference in charging time between wired and wireless charging. Averagely, it costs about 3 hours to fully charge the device, and the charging current also maintains in the range of 600 mA. Comparatively, the charging current of wired charging is higher than wireless charging. The temperature of the wired charging is only 34 degrees, lower than the temperatures of wireless charging, 40.9 degrees and 38.7 degrees which are still in an acceptable range. 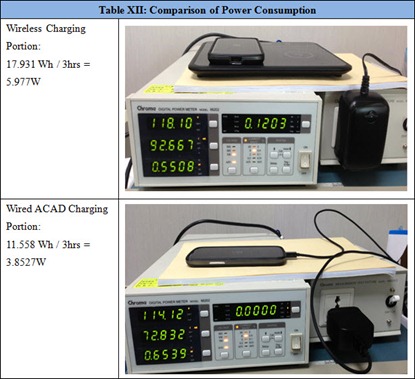 For the current development trends of both technologies, we can find that the USB-IF has accelerated the protocol definition and promotion of BC specification with the popularity of USB 3.0 market. It makes the high-speed USB 3.0 not only transfer the images and data package, but also achieve the multiplexed goals for fast charging and strengthening the leading position of USB 3.0 charging in the market. Although the wired charging technology seems to be stable and effective; the future development trend has been gradually focused on the wireless charging technology. Currently, wireless charging can only provide the efficiency of 5W and up to 1A ideally (generally less than 70%), so it is still difficult to compete against the wired charging. But the most impressive features of wireless charging are unifying specification and resources. We believe with the enhancements of product development, the goal of getting rid of the complicated chargers and wires, and the elimination of the extra hardware costs will be coming soon.